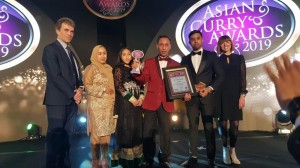 Tamarind Indian restaurant in Kemsing, near Sevenoaks in Kent, was named at the Asian Restaurant of the Year – Home Counties at year’s Asian Curry Awards.

The only other successful Kent restaurant at the Awards was Everest Inn in Ashford, which was named Best Nepalese Restaurant. 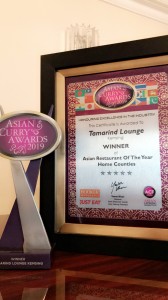 Receiving his award, Tamarind owner Suna Meah, said: “This is the best moment in my 30-year career in the hospitality business.”

At the same awards in 2016, Tamarind received a highly commended accolade. 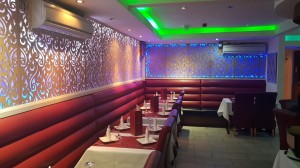 Since opening Tamarind four-and-a-half years ago, Meah was invested more than £200,000 refurbishing the property, transporting it from a takeaway to a 70-seater restaurant, employing 5 kitchen staff and 7 front of house.  He has ambitious plans to extend the building to cater for up to 120 customers, with a private dining area and a bar for pre-dinner drinks and takeaway customers.

Tamarind made to shortlist following the votes of hundreds of customers – mostly from local regulars, but a significant numbers of motor sport fans, visiting the area to attend events at nearby Brands Hatch.

The Asian Curry Awards judges who visited the Kemsing restaurant in October, commented on the “exceptionally friendly service, and warm, lively ambience.” 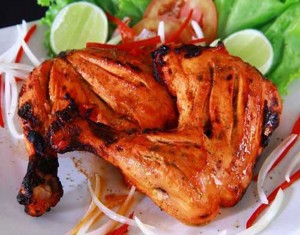 The restaurant receives fresh daily deliveries from local suppliers including nearby Chart Farm and Dennis of Bexley, an award-winning local butcher.

Meah now plans to add a short, seasonally changing, fine dining menu using more local produce including Chart Farm venison and “a massive celebratory party, to thank our local customers for the lovely villages of Kemsing, Otford and Seal, who voted for us in such numbers.”