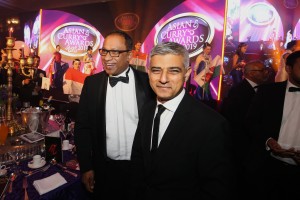 Over 700 VIP guests attended the Asian hospitality sector’s most prestigious event, the Asian Curry Awards in Association with Just Eat, at the Grosvenor House in London’s Mayfair on Sunday 17th November.

Guest of Honour, Sadiq Khan, the Labour Mayor of London, took the opportunity to attack the “Government’s ‘wrongheaded’ approach to immigration which is making it difficult to recruit the chefs and skilled workers.”

On a positive note Sadiq Khan praised the contribution of the British Asians. “By bringing the best of Asian culinary traditions to these shores, these restaurant owners have expanded not only the choice of food available to the British public, but our very identity as an open, inclusive and multicultural nation,” he said.

Hospital Venue of the Year went to Maida in Manchester, whilst Spice Village, Croydon, was revealed as Best Event Caterer.

A special Social Responsibility of the Year award went to Millennium Balti, Royal Leamington Spa and there were Entrepreneur awards for Ajmal Mushtaq (Mushtaqs, Hamilton) and Habib Chowdhury (My Curry Club, Cheshire).

There were also a number of local and regional awards.  The full list can be viewed at www.asiancurryawards.com

Addressing an audience of ambassadors to London, high commissioners, senior politicians, embassy officials and business, Yawar Khan, Chairman of the Asian Catering Federation, which hosts the Awards, congratulated the winners, but warned them not to rest on their laurels.  He said: “We work in a dynamic, fast developing sector where customers’ dining habits are constantly evolving.”  He encouraged them to embrace change and welcome the challenges.

The biggest round of applause went to the Asian Curry Awards’ longstanding Chairman of Judges Pat Chapman, editor of the Cobra Good Curry Guide – who on the eve of his 80th birthday – was too ill to attend. Accepting the award on his behalf, fellow judge George Shaw said, “Everyone who works in the curry sector owes Pat a huge debt and never has a Lifetime Achievement Award been so richly deserved.”

The evening, with lavish hospitality and live entertainment was hosted by the brilliant stand-up comedian, Cally Beaton.