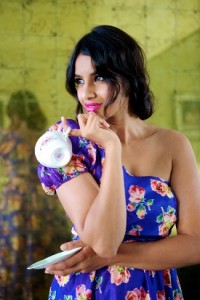 Food writer and cook Ravinder Bhogal is to open her first in London’s Marylebone. Jikoni, meaning ‘kitchen’ in Swahili, will draw on Ravinder’s mixed heritage and travels, with flavours and culinary traditions from Britain, East Africa, the Middle East, and Asia.  The restaurant will be dedicated to the “maternal figures who made my world safe with their food’.”Jikoni will honour the legacy of women who have shared their kitchen wisdom with her, and for whom the joy of eating, and eating well was paramount.
The menu will be split into ‘Snacks’, ‘Small Plates’, ‘Big Plates’ and Desserts. Ravinder’s scotch eggs that have been a signature at her pop-ups, will take pride of place, with unusual takes on the English classic including a Prawn Toast quail scotch egg with Banana Ketchup and Pickled Cucumber, and Goan inspired pork scotch egg served with Tomato and Ginger Chutney and a spiky Carrot Achaar.  Offerings from the ‘Small plates’ menu will include an Indian take on the American ‘sloppy joe’ made with Herdwick Mutton Keema, pickled onions and mint chutney, and crisp Soft shell crab to be served with Ravinder’s a peanut sauce. ‘Big plates’ will be comfort food dishes like a spiced up Shepherd’s Pie or a home ground Ras Hal Hanout Lamb served with Mujadarra. There will also be a daily changing Rice Plate celebrating curries from all over the world including Kuku Paka – a favourite chicken curry from Kenya made to a family recipe.