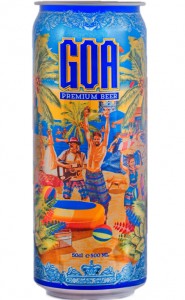 In response to growing customer demand, Indian-based Viiking Ventures is now shipping its 4.8% ABV gluten-free beer, for the off trade in 500ml cans with an SRP of £1.39.  The striking can design depicting a Goan beach party scene, for which the coastal state is famous, gives the product considerable point of sale impact.  Until now the pilsner had only been available in restaurants in 340ml and 650ml bottles, where it sells  for between £4.50 – £4.95 for the larger bottle and between £2.65 – £3.25 for the small.

“We have been bombarded with enquires, not just from coeliacs and those with a gluten intolerance who want to drink our beer at home, but also from those customers who discovered the authentic Indian product in restaurants and like the clean, sharp, refreshing taste,” said Goa Premium Beer director Frank Sequeira.

The gluten free beer, brewed using a unique malt and maize based recipe, is already available in around 300 bars and restaurants. Strong sales are being reported with the beer now available in top London venues such as The Painted Heron, La Portes des Indes and Gaylord plus leading regional restaurants such as Chilli Pickle in Brighton, Purple Poppadum and Moksh in Cardiff, Urban Tandoor in Bristol,  Bukharah in Glasgow, Ambrette restaurants in Kent and Sussex and the Koh Thai Tapas chain throughout the south-west.