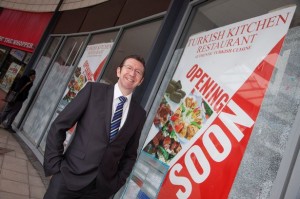 Cevet Mutlu, who owns a chain of Turkish restaurants in the Midlands and south of England in Hertford, Hitchin, Peterborough and Woking, is set to open his first venue in Wales.

The 5,200 square foot venue is on the site of a former Chinese buffet restaurant. The restaurant will have 220 covers and feature an open-plan kitchen and employ up to 18 staff.

Mutlus, 47, arrived from Turkey in 1974, got a taste of the restaurant business when he started helping his father in the two he owned in the West End of London.

Mutlu claims to be ” a little bit like Gordon Ramsay – but without the swearing.”