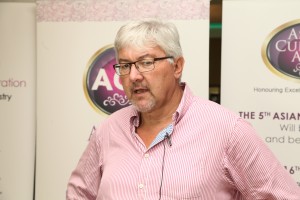 I have been asked many times over the years, ‘What makes a successful restaurant? writes George Shaw.

Easy to say.  Incredibly difficult to achieve.  Especially the former.

I recently visited the excellent ‘Knights of the Raj’ exhibition by Mohammed Ali in Birmingham.  It charts the history of the city’s first curry restaurants.  Of the future it warns: ‘In order to survive, the industry needs a rethink.  Some restaurateurs have begun to embrace change; refinements to the menu, décor, marketing strategy and service standards all help us win back custom.’

I’ve been asked to launch numerous restaurants.  And turn around even more.  More still are those where I’ve been brought in to advise a business that has cost hundreds of thousands of pounds to open – but then told that there is nothing left for marketing.

This is unique to the restaurant trade.  Most other businesses start with the marketing:  assessing the potential, studying the competition, observing footfall, market segmentation, customer research, analysing trends and the rest of it.

The situation is particularly prevalent with Bangladeshi-owned restaurants, which tend to use family money to raise capital – rather than borrow from a bank.  It’s model which offers many benefits.  But also, certain disadvantages.  Because no case has to be made to a cynical bank manager, rarely is a business plan produced.  There’s no strictly critical outside opinion to point of potential weaknesses and threats to the concept.

Marketing has never been cheaper than it is today.   Technology advances has meant the mechanics of traditional print production, has seen costs slashed in absolute terms over the past 30 years.  The opportunities afforded by electronic marketing are even greater

With minimal outlay, many successful restaurants are communicating with thousands of existing, and potential new, customers – at the click of a button.

Once set up, marketing communications through an electronic database or social media, is virtually free.

Yet on a weekly basis, I am told by owners presiding over empty covers, “I don’t understand new technology.”

No.  No one does until they learn.  It’s like learning to cook, ride a bike, drive a car or swim.  These are things we have to be taught or learn by trial and error.  Usually a combination of the two.

Much of this “new technology”, has been around for over a quarter of a century.

Running a Twitter account is so easy, even Donald Trump can do it.  He’s in his 70s.  And nowhere near as clever as he likes to think.

The number of independent restaurants who don’t have their own functioning website, with data capture and regular updates, astounds me.  Equally astonishing is those which don’t answer customers’ email enquiries or tables bookings.  It’s not unknown for some to misspell ‘curry’, get their telephone number wrong or forget to include their address.

Too many of those that do engage in marketing, do it to give away their profit margin; with discounts, 2-for-1 offers and freebies.

Worse still are those who spend money promoting events, like Mother’s and Valentine’s Days, when they will be turning away customers in any case.

The launch of a new opening is crucial.  You only get one chance to get it right.  Open with a bang with the right offering and you’ll stay busy.  Your return on the investment will be achieved very much quicker than opening with a whimper.  If it ever is.  Investing a pound before you launch, is worth £5 spent trying to boost a sluggish start.  Journalists love writing about an exciting new opening.  A half empty restaurant, that has been open for 3 months, holds less appeal.

Equally damaging can be opening on a weekend, with new staff in an unfamiliar environment, to a restaurant full of paying, dissatisfied customers.  A non-profit making midweek soft launch, with a limited menu and just enough VIPs, local journalists, opinion formers and key target customers, will pay handsome dividends in the short-term.

Nothing makes a table more desirable, than being told the restaurant is fully booked.

Ideally, marketing a new restaurant should begin at least 3-months before you open.   Even building delays can help intensify the eager anticipation of a ‘new kid in town.’

I helped one restaurant owner open 10 restaurants in 4 years.  He then sold less than a third of the business for more than £6 million.  Over lunch one Monday in his near full restaurant (with every other eatery on the high street almost empty), he told a journalist, “We can’t afford not open with a bang.  It’s not marketing that costs money – it’s empty tables.”