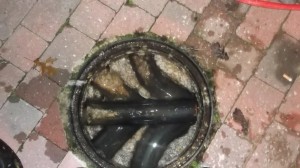 Severn Trent Water has successfully prosecuted a South Stafford restaurant in a ‘landmark case’, for blocking the sewers with fat, oil and grease – which led to nearby businesses being unable to flush their toilets.  Café Saffron in Church Rd, Codsall, was fined £5,500 at Wolverhampton Magistrates’ Court.  This is only the second example of such a case being brought in the UK.

Iit is an offence to discharge anything into the sewer that may interfere with the free flow.  In this case, blockages had been reported on several occasions, with complaints from neighbouring businesses that they could not flush their toilets.  The restaurant was found to be the cause of the blockage with fat used in cooking being put down the drain and into the sewer where it coagulated and caused the blockages.  Severn Trent visited the premises on several occasions, sent letters and had many conversations with the restaurant owners, asking for grease traps to be installed and warning of the consequences, but the owners refused.

Emma FitzGerald, MD of Wholesale Operations for Severn Trent Water, commented: “”The verdict in this case is an important milestone for us, and we really want this to make other companies think about what they are doing with regards to disposing of fats, oils and grease and how it impacts our customers.  We clear around 45,000 blockages a year and fat contributes to the majority of those, as it binds together all the other things that end up in the sewer rather than the bin and creates huge lumps which block the sewers.  This is totally avoidable and in this case, simply installing a small grease trap could have prevented the situation.  Legal action is a last resort for us, but our customers shouldn’t have to suffer because of the actions of one business not following the rules, and ignoring our advice.”

Following the conviction, the restaurant has,  committed to install a grease trap.