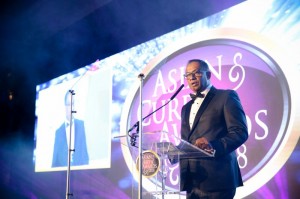 Around 1,000 VIP guests attended a glittering gala dinner at the Grosvenor House in London on Sunday 18th November, to honour the winners of the 8th Asian Curry Awards, organised by the Asian Catering Federation (ACF).

These are the nation’s only accolades dedicated to the entire spectrum of pan-Asian cuisines, rewarding the best curry restaurants and takeaways. Winning an Asian Curry Award is widely regarded in the community as the ultimate achievement for a restaurateur or chef.

The awards were co-hosted by BBC TV presenter Babita Sharma and Tommy Sandhu from the BBC Radio Asian Network.

The Just East award for Best Takeaway went to Mushtaq’s in Hamilton.

There were also a number of regional awards for local restaurants.

In his keynote speech ACF chairman, Yawar Khan, urged restaurant owners to recognise and welcome customers’ changing dining habits, and to embrace the advantages of modern technology or “risk becoming another statistic”.

He also mentioned a number of new ACF initiatives for apprenticeship schemes and a training opportunities, with local schools and colleges, which will be announced in the new year.

Graham Corfield, UK Managing Director of Just Eat, sponsors of the Asian Curry Awards commented: “The curry industry is a multi-billion-pound sector thanks to the sheer hard work and dedication of every entrepreneur, restaurant owner, chef, waiter and delivery driver. I’d like to congratulate all the winners and nominees.”

The next ACF events are at the Palace of Westminster in February to launch of the 9th Asian Curry Awards.  The ACF will also be hosting their Asian Restaurant Awards in Manchester in March.