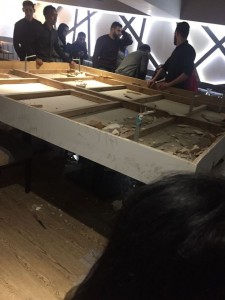 Managers of the Sizzling Palate restaurant in Bolton where ceiling collapsed, rendering two customers unconscious, say it was ‘not a major incident.’

Firefighters and police were called to the restaurant, on Bradshawgate, at around 10.30pm after part of the ceiling collapsed.

Customers and staff had to lift the a heavy panel off diners trapped beneath amid chaotic scenes, according to eye witnesses.

A spokesman for the restaurant said: “Please be advised that this was not a major incident and thankfully, nobody was seriously hurt. A box section of a suspended ceiling in the lower ground restaurant came loose from its fixing and dropped. A couple of customers sustained some minor cuts and bruising . . . and one person was taken to hospital. The restaurant continued to trade as normal.”

Contradicting the official version of events, a witness told the Manchester Evening News that six women injured and that, “It took about 25 of us to lift it off us. Firefighters were there very quickly. Everyone was screaming and shouting and panicking.”

Three men and two woman were taken to hospital and have since been discharged. Others were assessed at the scene by paramedics.