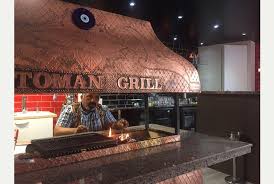 A new Turkish and Mediterranean restaurant concept, Ottoman Grill, has opened in Exeter city centre  .The 60-cover restaurant loccupies the former site of Dinky’s Play Café, which closed in June.  The venue in Guinea Street is the brainchild of the Demir family.  Huseyin Demir, a chef with 30 years’ experience, will run the kitchen, with a hand-made copper barbecue and wood-fired oven as the restaurant’s centrepiece.

“It’s one of a kind in the south west.  The nearest one I know of is in London,” said Demir, who added, ” People will be able to sit around it and watch their food being cooked.”