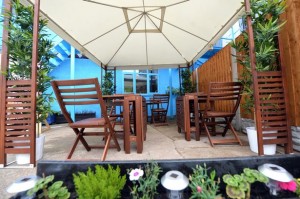 Turkish restaurateur Kilbria Ghulam is expanding his Konya with the launch of a second restaurant in Birmingham  –  this time in the city’s  ‘Jewellery Quarter’.

Chef Akram’s dishes will include baba ghanoush, tabboleh made with bulgar, falafel and fattoush salad, and mixed meze platter. There will also be fish dishes and charcoal-grilled meat, while drinks will include “mocktails”.

The 28-cover restaurant has a distinctly Mediterranean interior with Arabian influences with chandeliers, imported mosaic tiles, a curtained off area and  a  courtyard for al fresco dining that seats ten.
“Konya is an area in Turkey famous for its elegant cuisine. We added gold to the name in tribute to the Jewellery Quarter,” said Ghulam