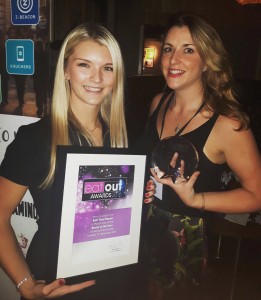 Koh Thai has been named Brand of the Year in at the Eat Out Awards 2016. The event recognised the best of the dining out sector in Britain. Founded in 2009, Koh triumphed through of its continued development of its CDE (Complete Dining Experience) concept, word-of-mouth marketing and social media and experiential marketing.

The Koh brand operates across 11 sites in the south and west, with a 12th slated before the end of the year. Brand development plans for 2017 include four further restaurant openings and the return of Koh’s experiential pop up on Bournemouth beach, Koh Lounge.

At the ceremony at The Gable in London’s Moorgate, attended by 200 guests including industry leaders in the hospitality sector, Harvester took home the Nation’s Favourite Eating Out Experience trophy for the second year running, whilst McDonald’s scoope in the Grab & Go Experience gong.

Celebrity chef Aldo Zilli led a countdown of the top brands in each category, including PizzaExpress, Nando’s, Costa and Greggs.