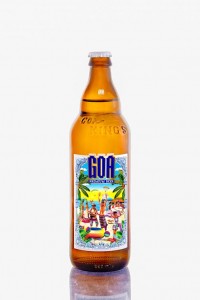 Prices held despite fall in sterling

In response to customer demand Viiking Ventures is now importing a 650ml bottle of its Goa Premium Beer.  The new sized 4.8% ABV beer adds to the original 340ml bottles.

Fortunately, the first shipment was paid for before the recent fall in the value of sterling on international currency exchanges, following the pro Brexit vote in the EU referendum.  The pilsner beer sells in restaurants between £4.50 – £4.95 for the larger bottle and between £2.65 – £3.25 for the small.

The gluten free beer, brewed using a unique malt and maize based recipe, is already available in around 300 bars and restaurants.

Strong sales are being reported with the beer now available in top London venues such as The Painted Heron, La Porte des Indes and Gaylord plus leading regional restaurants such as Chilli Pickle in Brighton, Moksh in Cardiff, Bukharah in Glasgow, Ambrette restaurants in Kent and the Koh Thai Tapas chain throughout the south-west.

“Fortunately, the current price has been unaffected by recent falls in the value of sterling,” said Goa Premium Beer director Frank Sequeira, who added, “We hope the price rebounds when the initial shock reaction to the Brexit vote, which caught currency traders off guard, eases and markets return to normality.”

“We hope to maintain stable pricing, but restaurants may want to order now to hedge against a potential price rise,” added Sequeira.

Sequeira thinks long term, the decision to leave the EU could be good for Asian restaurateurs.  It should pave the way for more recruitment skilled chefs from outside Europe; exotic ingredients grown outside the EU should become cheaper as tariffs come down and enable third world farmers to trade their way out of poverty.

The humid, tropical Goan weather works its alchemy on the water, to give Goa Premium Beer its crisp, refreshing flavour.

Marketing is under the ‘Come Alive’ theme embracing the hedonism of the beach party offered by Goa Premium Beer. The packaging is inspired by the Portuguese ‘azeljos’ art form of Arabic origin that is now widely seen in Goan churches and homes.

Located in south west Indian on the Arabian Sea coast. Goa is famous for its beaches and attracts tourists from across the globe, with many discovering excellent Goa Beers, which have not been read available in the UK until now.

Although rice and millet beers had been brewed in India long before the arrival of Europeans, British-style beer was introduced in India by the East India Company around 1716.  To protect the beer from spoiling during the long sea voyage it needed a high alcohol and hops content. India Pale Ale (IPA) was created about 1787 and became popular in England around 1840.

Portuguese colonists were lured by the weather to relocate their capital from Calicut to Goa, where they ruled for 450 years until it was annexed by India in 1961.

It was Portuguese who introduced many of the foods and spices (including chilli, cardamom, mango, tomatoes, and potatoes) now commonly associated with Indian cooking, to the sub continent from the Americas.