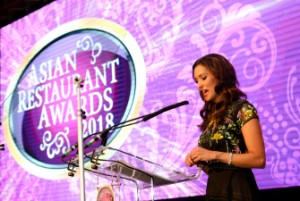 The winners of the inaugural Asian Restaurant Awards were announced at a glittering awards ceremony, held at the Manchester Hilton, on Monday 5th March. The evening, attended by over 500 leading restaurateurs, chefs, food journalists and VIP guests, was hosted by BBC TV news anchor, Barbita Sharma.

The Asian Restaurant Awards were organised by the Asian Catering Federation (ACF) which represents the nation’s 30,000 Asian and Oriental restaurants.

In his keynote speech, ACF Chairman Yawar Khan declared the Asian Restaurants Awards a great success and promised to return next year with “an even bigger and better event.”

In his programme notes, Asian Restaurant Awards judge, George Shaw, commented: “Over 25 years ago culinary pioneer Madhur Jaffrey told me that too many Asian restaurant owners were in a race to the bottom, under cutting each other’s prices, with enormous menus of poorly cooked dishes. Tonight, we celebrate the achievements of those in a race to the top.”

The awards are sponsored by Just Eat and Booker Wholesale and supported by ACF Utilities, the Asian Hospitality Federation of Europe, Aroma Ice Cream and Mohammed Shah & Co Accountancy.