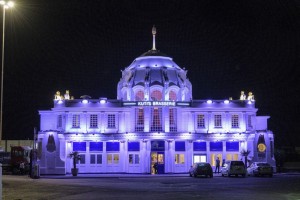 Kuti’s Brasserie, a fine dining Indian restaurant has launched in the former gate house of the historic Royal Pier in Southampton. Styled ‘Empress of India’ after 1876. Queen Victoria opened the Royal Pier in 1833. After being introduced to Indian cuisine by her ‘Munshi’, Abdul Karim, on the Isle of Wight, she ate curry every day.

Set in an imposing two-story property, Kuti’s Brasserie has four dining areas with 110 covers on the ground floor; 60 on the first floor; 30 upstairs in the Chandelier Cocktail Bar; and 60 additional seats on the outdoor rooftop terrace, with views across Southampton Water.

Kuti’s Brasserie is on the former site of Royal Thai restaurant, which occupied the venue for 10 years until recently.  Kuti’s Brasserie is owned by restaurateur Kuti Miah, who aged 60, still works front of house.  It was formerly located in Southampton’s Oxford Street, until it was closed by fire in April. He also owns Kuti’s Express, a takeaway on Southampton’s Aldermoor Road; Kuti’s Noorani in Eastleigh in Hampshire and Kuti’s of Wickham, near Portsmouth.

“A venue such the Royal Pier’s Gate House deserves a first-rate restaurant with a world class chef – and with Ravi, wo now have one,” said owner Kuti Miah, adding, “He’s a great addition to Southampton’s dining scene.

To coincide with the reopening of the Mayflower Theatre in Southampton, following its recent £7.5m renovation, one of Chef Roa’s first initiatives will be to introduce an early evening, express pre-Theatre menu.