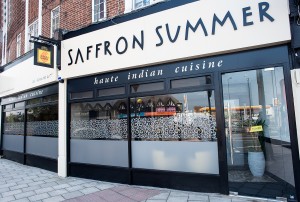 Saffron Summer, the award-winning Indian fine dining restaurant in Chessington in Surrey, is offering free meals to children for two weeks around the Easter holidays.

All children aged 10 and under eat free when accompanied by a minimum of one paying adult.  School kids choose a main dish from a special menu plus a choice of naan or rice, with an ice cream dessert to follow. Tables need to be pre booked mentioning ‘kids treat.’

“The school holidays can be an expensive time of year for parents with young children, especially those that will be visiting the nearby family attractions of Chessington World of Adventures and Thorpe Park,” said restaurateur Ralph Sousa, adding, “Many of our younger customers have discerning tastes – not all children want to eat unhealthy junk food and we want to educate young palates to the delights of authentic Indian haute cuisine.”

The legendary Pat Chapman, Editor of the Cobra Good Curry Guide, said when visiting Saffron Summer, “You won’t find better Indian food anywhere,” which is confirmed by its being ranked No. 1 Indian Restaurant in Surrey on the TripAdvisor reviews website*.

During National Vegetarian Week (13th to 19th May), Saffron Summer will be serving a special three course vegetarian menu, with optional vegan drinks pairings, for around £24.95 a head. For each one served Saffron Summer will donate £1 to the Curry for Change charity, which works to alleviate hunger in rural Africa and India.