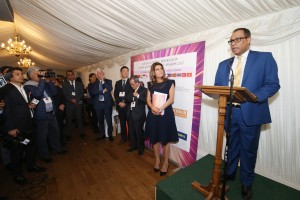 The ACF invited the curry chefs to a special presentation ceremony, hosted by TV presenter Samantha Simonds.   The top chefs were determined by public vote, which was topped by Alun Sperring of Chilli Pickle; Will Bowlby of Kricket and Karam Sethi of Hoppers.

The evening was attending by an impressive array of VIPs and dignitaries including the High Commissioners of Bangladesh and Nepal, Lord and Lady Sheikh.

A panel of judges led by the Cobra Good Curry Guide editor Pat Chapman, will now visit these venues.  Two overall winners (one casual, one fine, dining) will be announced at the November ceremony, along with other national and regional awards.  The full list of categories can be seen, and online nominations made, at  www.asiancurryawards.com.nominations

The 7th Asian Curry Awards will take place at the Grosvenor House Hotel in Mayfair on Sunday 12th November 2017.